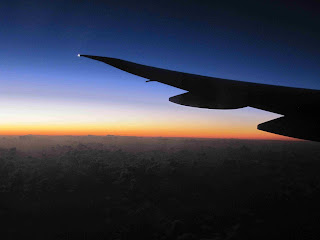 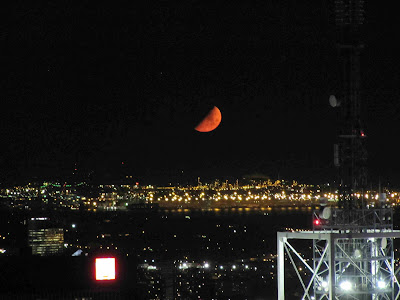 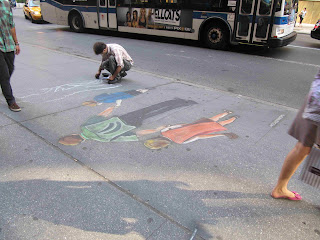 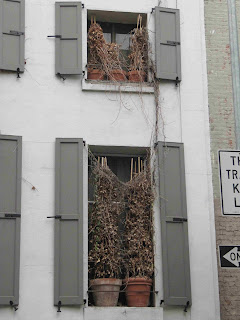 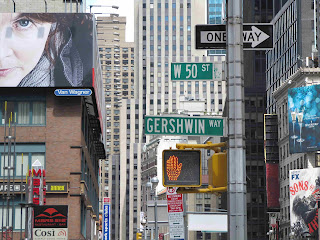 We visited the High Line, a New York City park, which is built on an elevated 1930s freight rail structure on Manhattan’s west side.  Built to remove freight trains from Manhattan’s streets, the High Line delivered milk, meat, produce, and raw and manufactured goods into upper floor loading docks of factories and ware houses.  The last train ran on the High Line in 1980 carrying a trainload of frozen turkeys.
Posted by wandagirl21 at 2:43 PM No comments:

1.  ‘Promises Promises’: A musical set in 1962 with music by Burt Bacharach.  We could all sing along, because our group had been there, done that.
2.  A preview of Edward Albee’s latest play, ‘Me, Myself and I’ was worthy of respect, as the author, an icon of American theatre, is now in his 80s.  But, respect for the play was not forthcoming from New York critics.  To quote the New York Post: ‘Newcomers to the playwright may be turned off his work forever; long time fans will feel let down because they know how much better he can be.’
3.  Moving right along, our next play, ‘Trust’ was an edgy and funny four-hander.
4.  ‘La Cage Aux Folles’ with Kelsey Grammer and Douglas Hodge accompanied by a corp de ballet of six leggy transvestites in wilting plumage.  The New York Times called it a ‘warm, winning production’.
So did we...tho it took us some time to realise that Douglas Hodge in his girlie wig was the actor from ‘Spooks’ and ‘Mansfield Park’.
5. Thornton Wilder’s ‘Our Town’: no stage, no scenery: just fine writing, fine acting.  I saw it as theatre of the mind, where the audience is an unwitting part of the play.  We see the imaginary moon, the town, its streets, as narrated by the 'stage manager'.  And in the final scenes, from the graveyard, I feel that the audience has been among those who have gone before: our role has been to be silent witnesses to the living, knowing that they too will join us…
6.  Moving right along…to a mind blowing (yes, pun intended) musical called ‘Next to Normal’.  The family is in deep denial, and the medical profession is all too ready to intervene.
The music is soft rock, superbly sung, well written lyrics that drill deep into the emotions. No holds barred, tough stuff.
7.  ‘The 39 Steps’, featuring Australian actor Jamie Jackson, is an acrobatic spoof of the film. We had supper with Jamie after the show.  He tells us that the role are so physically demanding, he has lost 14 lb.  He has signed up for the role for another six months, taking him through quieter months of Christmas.  So, it seems, he won’t be coming home any time soon.
8. Opening night of the New York City Ballet.  Superb.  We wear our diamonds. 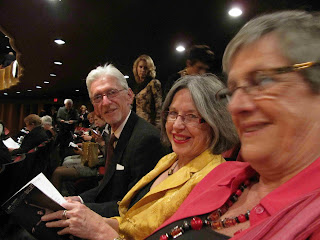 The interior of New York’s MoMa and, to a lesser extent, the Metropolitan Museum of Art, derives its sense of indoor grandeur from the US natural wonders, examples being the Grand Canyon, Yosemite Valley and Grand Central Station. 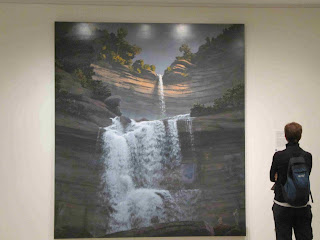 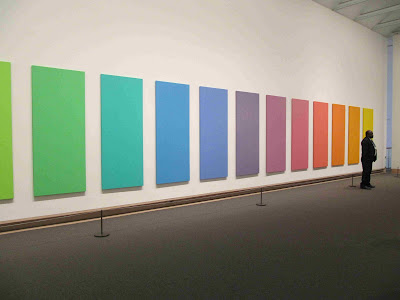 In some galleries, the ceiling is so high, it has its own climate.
But these galleries must accommodate huge art works, such as the abstract canvasses of Jackson Pollack whose hieroglyphics are simply Pitmans shorthand writ large.
By contrast, the Cloisters keeps a modest profile,  medieval architecture which folds into itself, as if in meditation.

At Birdland we saw a line-up of talent which, on a sliding scale of excellence, started with the best.
One of the first performers, Jonathan Russell a 15-year-old curly haired schoolboy, played an Olympian version of ‘Just one of those things’ on his violin.
Thirteen-year-old Ruby, currently performing in ‘Billy Elliott’, belted out a song with a sophistication beyond her years.  Her dad, who was sitting near us, was bald, except for a fringe of hair tied in a tiny ponytail.
Jim Rochu (spelling?), a white bearded performer, had this to say about the younger performers: ‘I have frozen food that’s older than them.’
His cats are named Ethel and Judy, and he sang ‘How do you fall back in love?’
We visit Steve Ross’ apartment: his piano occupies a third of his living room.  We fill the rest, and he croons to us over his keyboard. 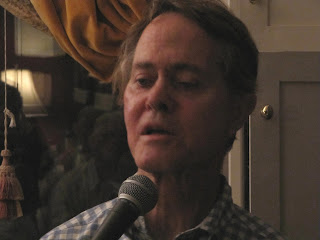